Cole, 93, is one of the oldest surviving members of the all-black horse cavalry and infantry units he always admired, serving from 1942 until 1946.

His mission today is to make sure that their rich history is never forgotten.

“I want people to know about these units,” said Cole, who lives in Mableton and is a retired supervisor for Lockheed Martin. “In this country black men fought in every war, but after the war was over they had to go back to where they came from. The buffalo soldiers fought Native Americans, built homesteads and forts and protected the railroad. They did all these things with inferior equipment and hand-me-downs. What other troops didn’t want, they gave to the black troops.”

The story of how they came to be known as buffalo soldiers varies. Some say “buffalo soldiers” was the nickname given to African-Americans in the cavalry by Cheyenne warriors during the American Indian Wars and later used by other native nations also. Were they so nicknamed because of the texture of their hair? Or was it because of their bravery in battle?

“It was a combination of both based on the way the Native Americans had the respect of the buffalo itself and how fierce the buffalo would fight and defend,” said Andre Q. Williams, of Lawton, Okla., current president of the National 9th and 10th (Horse) Calvary Association of the Buffalo Soldiers. Cole was the founder of the Los Angeles area chapter.

The association has about 45 chapters in the United States and Germany.

“Young people, old people. In my experience, the white people know more about the buffalo soldiers than black people,” Cole said. “You can hardly find any young people who know. Why isn’t it in the schoolbooks? They’re not getting this history from their families, so the only way they get it is from us.”

Their numbers are dwindling.

Regiments of African-American men known as buffalo soldiers served in the American West, fighting Native Americans and and protecting settlers, according to the History Channel. They eventually included the 9th and 10th (horse) cavalries and the 24th and 25th infantries .

Cole was born in North Pelham, N.Y., one of 11 children. His mother, Arline Batman-Cole, was a maid and his dad, George Cole, held a variety of jobs including owning his own business and working in gas stations.

Cole went to integrated schools and had friends of both races. In fact, on his side of town, most residents were either Irish or Italian.

“I did not know of any discrimination,” he said in the book, “We Can. We Will. Ready and Forward.” My family did not teach it. We could go anywhere and anyplace the white people went.”

Cole was still in high school, but the desire to defend his country gnawed at him.

“Every red-blooded American wanted to do whatever he could to defend his country and his family,” said Cole. When he was 17, he persuaded his parents to let him to join the military.

He joined alongside four friends.

Imagine his surprise when, having grown up and socialized with whites, he was eventually placed in a segregated unit with white officers.

The U.S. Army life was hard for him. He didn’t like being told when to wake up and when to eat, and the clothes only came in two sizes: “too small and too large.”

He was first sent to Camp Upton in Long Island, then shipped to Fort Riley, Kan., and Fort Clark in Texas, where he was assigned to Troop F, 9th Calvary.

In 1943, he was stationed in Oran, Algeria, and was there when German fighters bombed the area. Later he was sent to Italy and later participated in the fight in southern France. He was discharged in 1946.

In 1953 he enlisted in U.S. Air Force and retired in 1969. In his roughly two decades of service he had traveled to 17 nations.

Paul J. Matthews, a retired U.S. Army captain and founder and chairman of the board of the Buffalo Soldiers National Museum in Houston, said Cole played a key role in getting the museum off the ground.

The museum opened in January 2001 to honor the contributions of African-Americans in the military, particularly buffalo soldiers.

“He made a significant contribution in terms of artifacts, documents and memorabilia and he also donated to the museum financially,” Matthews said. He also helped land a permanent home for the association in Houston.

“He’s very intelligent and a passionate individual,” he said. “He knows a lot and talks a lot about the African-American military experience. What he does is provide context and not just content. The reason he can provide context is that he was there. He can tell you what it was like to be in a segregated unit. He can tell you about the integration of the military and what that was like.” 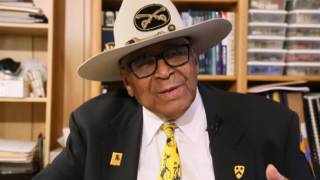